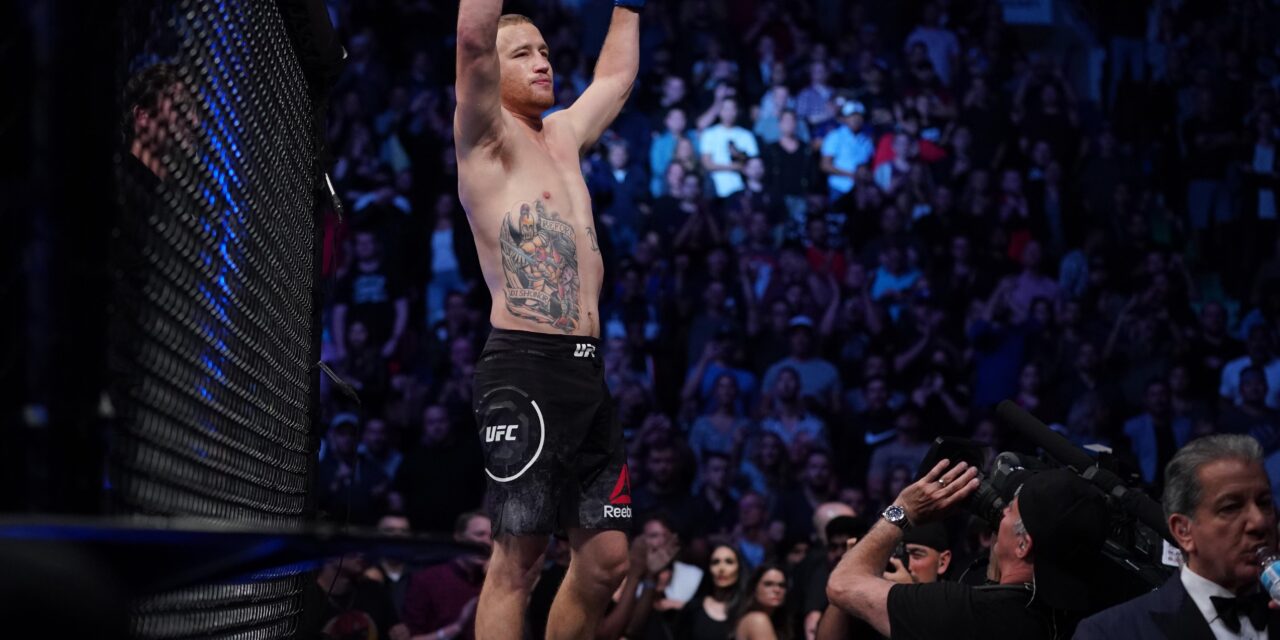 Donald the ‘Cowboy’ Cerrone is considered by many as the journeyman of the UFC, a pillar that holds up the sport. The American has paved the way for UFC fighters and has grown with the vastly popular UFC franchise, cementing his rightful place in the sport’s history books.

Cerrone has no intention of hanging up the gloves anytime soon, with a potential blockbuster bout with Connor McGregor on the cards early next year. The Denver born-brawler has made his stamp on the sport recording some epic takedowns over the years, but which five are your favourite Cowboy finishes?

Jabbed Edson Barboza to the Canvas

April 2014, Edson Barboza breezes into the Amway centre riding a three-fight win streak, with the intention of kicking his way to victory against challenger Cerrone, but the Cowboy had other plans.

Barboza was considered at the time to possess the best kicking in the UFC and was determined to use his strong attributes on the Cowboy that night — but Cerrone made it clear that he was in the driving seat — demonstrating why he is a veteran of the sport.

Minutes into the first round, Barboza tasted Cerrone’s leather and dropped to the canvas in one choreographed motion. Cerrone wasted no time and employed a textbook rear-naked chokehold on the Brazilian to send Barboza packing.

Following Cerrone’s ferocious first-round finish against Barboza, The Cowboy was matched up against the iron-fisted Jim Miller. The fight came three months after his Barboza victory, but this quick turnaround hardly affected the Colorado native.

The fight was pinned for five rounds, but the finishing power these two warriors both possessed made it an unlikely contest to go the distance.

The first round featured a handful of action from both corners, with Miller testing the durability of this opponent and Cerrone showcasing his clear reach advantage. Cerrone’s reach played a huge part in the first five minutes and Miller had to take a step back to avoid being hurt.

Round two started instantly, with Cerrone snapping kicks to Miller’s torso. The Denver born fighter carried on working Miller’s body with a profusion of powerful kick shots, until the contest was paused for an incorrectly called low-blow — which gave Miller time to compose himself.

Donald, visibly angered with the call, had to shake off the badly refereed decision and continue his work on the A10’s fragile body.

Cerrone switched up his attacking prowess by landing a precise kick to Miller’s neck — advertently toppling the giant to the cage wall — before the bout was stopped.

In 2012, Cerrone went toe-to-toe with Melvin Guillard in a fight that only lasted 4 minutes. Both men entered the octagon with unbridled respect for one another — with a long history of friendship and both being former training partners — but when the men stepped into the cage they both had only one job to do, battle it out.

The contest was held in Cerrone’s home town of Denver, Colorado, and the hometown-hero received a hard-earned ovation.

Only ten seconds into the first round, the underdog Guillard countered the hometown favourite with an overhead left, forcing the shell-shocked Donald to the canvas. Cerrone snapped back to his feet all-the-while being dangerously stalked by The Young Assassin.

Guillard, who took the fight on short notice and was clearly the underdog, was mapping out a photo-finish with Cerrone’s legs clearly wobbling. The wounded Cerrone was there for the taking, but Melvin would once again fall into his bad habits and pay the usual toll.

Cerrone jolted into action after being gifted with time to compose himself and launched a beautifully left-legged kick to Guillard’s head.

Cerrone finished the night with a straight right that placed The Young Assassin’s body sprawled face first on the canvas. Cerrone that evening, exhibited his endurance and attrition to get the job done after falling short early.

A Horror Story for Rick

In 2016, Cerrone moved up a weight in a search for the coveted gold belt. The American remained undefeated in his first four fights and was demonstrating that he was at his physical peak.

Cerrone was matched against Rick Story as the supporting cast at UFC 202, where Connor McGregor defeated Nate Diaz, but that didn’t stop the Cowboy stealing some of the limelight that evening.

That evening, Cerrone landed some of the best combinations ever witnessed inside a cage.

Story was the bookies’ favorite, but MMA betting can be unpredictable, with underdogs prevailing in the eight walls more often than not.

Not many expected Cerrone to finish the durable Story, especially in such an emphatic fashion.

Donald had found his stride and was countering his opponent and controlling the bout with spectacular prowess — mixing his style with hand combo hits and powerful knee shots.

The Southpaw, Story, attempted a straight left but was met with something far deadlier in response — jab, straight to the body, left hook and then a devastating right high kick.

The jaw-dropping combination raised a few eyebrows and sent Story wobbling towards the fence, with an adrenaline-filled Cerrone chasing down the injured Washington born-brawler.

Cerrone swarmed his opponent showing no mercy, landing big knee shots and a combination of hooks. Story’s face swallowed every hit and the referee had to interject to stop the bout as the Horror Story collapsed to the ground.

For our final top-finish in Cerrone’s career, we journey back to 2016, where he fought fellow veteran, Matt Brown.

Before the two men stepped into the octagon, Brown was foul mouthing his UFC 206 opponent. He claimed that Cerrone was not an “honourable martial artist” but a common bully. The bad blood transcended into the weigh-ins, with Brown refusing to shake Cerrone’s hand.

The contest between the two fighters was a technical scrap, both men trading a variety of Kickboxing and Muay Thai blows.

Both camps had an arsenal of fight styles in their lockers, it was how they utilised it on the canvas that counted. Cerrone dictated the fight — visibly winning rounds on the scorecards — he controlled range with his jab and advertised his high-level kicking game to perfection.

The fight lasted longer than most anticipated as it made its way to the third and final five minutes.

Donald had landed his trademark head and body kicks throughout the fight and only Brown’s defensive capabilities and tough experience carried him past a barrage of attacks.

Dreaded fatigue set in for Brown when the third round came and Cerrone took full advantage of his opponent’s sloppy guard, launching a final head kick which put his opponent where he wanted him to be, on the canvas.

Cowboy looked down on the fighter he had picked apart, while his admiring crowd were still in awe of his outstanding finish. Dismantling Matt Brown fired Cerrone to stardom and solidified him as one of the most dangerous men on the planet.

It seems that every time Cerrone emerges from the eight-sided pit of violence, a new record is born. This workhorse still has plenty left in the tank to compete at the top level, so hats off to the Cowboy.