Should we hate the Devil Rays more than the Yankees?

Any writer worth their [insert metaphor here: salt, poop, ascot, whatever] writes their introduction after they’re finished with the body of their piece. This column ended up being long. The topic is whether we should hate the Devil Rays more than the Yankees, and that’s enough of a description to let you feel the tenor of my piece before diving in. So this introductory paragraph has served its purpose.

The Yankees have a history of stealing the best talent from the Red Sox, beginning with Harry Frazee selling Babe Ruth to New York in 1919 – subsequently selling the soul of the Red Sox away for nearly a century. Perhaps it’s not coincidental that the Red Sox started winning championships again when another larger than life – and large around the waist – slugger anchored their lineup.

More recently, the Yankees had the services of former Boston favorites like Wade Boggs, Roger Clemens, Johnny Damon, and Kevin Youkilis. Jacoby Ellsbury threw away his soul, and a chance at Cooperstown, when New York gave him $153 million to play there right now. Even King of the Bearded Homeless Dude look Andrew Miller shaved off his face mane to look like the tallest 12 year old in the Yankees’ bullpen.

Couple this with the Alex Rodriguez trade clusterbleep in 2003 – where for months the then shortstop and now disgraced player was rumored to be coming to the Red Sox only to have the Yankees take him from us – and we remember how strong this rivalry has been. Back then, who could have predicted that Boston would benefit from not acquiring A-Roid? All we understood then is that the Yankees stole the best player in baseball from us, and it ruined Nomar Garciaparra’s faith in Boston’s front office management.

The cut throat, business-like, professional mentality of the Yankees make the Bronx Bombers the proper representatives of that borough which lies to the south of Yankee Stadium; the borough that contains the blood-sucking leeches on Wall Street who would slit our throats if it meant getting an extra percentage point return on their commodities portfolio.

If you think about it, the Yankees truly represent the city they play for. This fact is an oddity in an era when the NFL has overtaken MLB as America’s primary professional sport. This fact might even make you smile when you consider that NFL franchises stand for nothing. New York’s two football teams play in the same stadium in New Jersey, for bleep’s sake. As far as teams representing the character of a city goes, the NFL is a joke.

Ironically, that cut-throat professionalism of New York City also makes the Yankees an admirable foe. To the Yankees, baseball is just business. It’s not life or death, it’s just a job. Cut your hair, shave your beard, put your head down, don’t express much emotion, and just get the job done. No excuses. “Keep Calm and Chive On” if all you speak is bro. We may consider the way the Yankees play to be boring, but it isn’t offensive.

Afterward, George Steinbrenner would put the politics on the field aside to make an annual $10,000 contribution to the Jimmy Fund.

Contrast this with the Tampa Bay Devil Rays, who truly are the antithesis of Boston.

I will always call them the “Devil Rays,” but the reason why they changed their name to the “Rays” makes this team, like the Yankees, representative of the area they play for. There’s nothing refreshing about the Devil Rays representing crazy, paranoid, born again Bible thumping fundies who made the team remove “Devil” from their name because it was too evvvviiiiiillllll!

Boston has a strong Catholic tradition, but we don’t have the Bible thumpers on this level. And thank God. Or beer. Or bourbon. Or D-cups. Or whatever else you choose to worship. (I’ll stick with the latter three, thanks.)

It gets worse, because the Devil Rays represent not just a bi-city area, but a whole state full of crazy people that feels fake. People who move to Florida are wusses who are allergic to touching a shovel during the winter; and those who are born in Florida seem to be the stupidest people on the planet.

Florida is where anything obscenely fake is harvested. Their cash crop is plastic, which grows into gimmicks that no intelligent person can stand for longer than a vacation. So it’s little wonder that, in the land of Disney, Joe Maddon spread like a weed which the populace regarded as a flower.

The irony of Joe Maddon being weaned in an Angels organization that was formerly owned by Disney isn’t lost on astute observers like myself. Maddon is the gimmick that Devil Rays’ “fans” needed, and he titillated their simple minds just like a trip to Disney World might give an eight year old boy his first erection.

What’s the first stupid Maddon gimmick you can think of? The first one I think of is the defensive shift he employed against David Ortiz, which every stupid baseball “journalist” claims is one reason why Maddon is a super-bleepin-genius. Maddon’s defensive shifts worked so well that it led to Ortiz having a horrible career line against the Devil Rays: .281 BA, .397 OBP, 44 HR, 152 RBI, and… Well, actually, those are some pretty damn awesome stats. Guess the defensive shift Maddon employed didn’t do bleep. The shift didn’t help the Devil Rays in the 2013 ALDS either, when Ortiz had a .556 OBP with two homers. But hey, who needs success when you have the gimmick?

Another stupid Maddon gimmick is having pitchers take as much time as possible between pitches. Every stupid baseball journalist claims that the Devil Rays develop the best pitchers in baseball, but MLB Rule 8.04 says that, when there’s no one on base, pitchers must deliver the ball to the plate no more than 12 seconds after receiving the ball from the catcher. So how long did David Price take between pitches in 2014? Only [ahem] 26.6 seconds – the most in the majors. How about Chris Archer, another venerable stalwart of the Devil Rays supposed juggernaut? Archer took 25.2 second between pitches.

Starting to see a pattern here? Additionally, do you know how tough it is to throw a pitch? When a pitcher gets to take an extra couple of breaths before throwing to the plate again, they aren’t feeling as much pressure as other pitchers who play by the rules. This may explain why David Price has a career ERA of 3.16, yet when he’s in the high pressure situations of the postseason, his ERA spikes to 4.50. So much for that gimmick.

What’s worse than the Devil Rays’ on-field gimmicks, though, is their off-field gimmicks. The hockey-style fog horn blared through the speakers of their worst stadium in baseball whenever a Devil Rays player hit a home run, and their fans blowing vuvuzelas during game, is enough to make Ignatius J. Reilly shout “Who’s responsible for this abortion?” 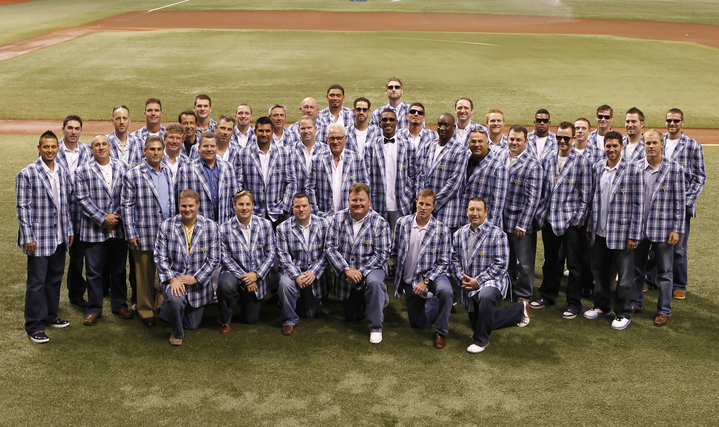 What the bleep is this?

And what the bleep is this? Does baseball need a team whose main gimmick is [fill in the blank with the flavor of the month] roadtrip themed weekends?

To Tampa Bay, baseball isn’t a businees like it is in New York City; and it’s not a religion like is in Boston. No. To Tampa Bay, baseball is just another bleepin’ gimmick that needs glitter, a tight skirt and a vajazzle just to keep their interest because their minds aren’t advanced enough to enjoy the beautiful simplicity of the game.

What else do you need to hate the Devil Rays? Well, let’s do a comparison of real and fake stuff.

We have Dustin Pedroia, they have* Ben Zobrist. Zobrist is purported to be a spectacular baseball player, but he has two gimmicks: being overrated for playing multiple positions, and being a crazy Christian Fundie. Zobrist co-authored a book with his wife about their “We must home school our children with Jay-sus against the EVIL AMERICAN (ie: Northeast Urban) LIFESTYLE!” Don’t believe me? Here’s the description of their book on Amazon:

Ben and Julianna Zobrist are standout talents, both using their gifts to glorify God. Ben is an All Star Major League baseball player and helped lead the Tampa Bay Rays to the World Series. Ben represented the United States in the World Baseball Classic and also leads Bible studies with his teammates. Julianna is a recognized Christian music artist whose music has affected the culture for Christ nationally. Julianna has performed on both the mainstream and Christian platforms and is actively involved in film and radio. Both Ben and Julianna speak about their faith at events nationwide.

We have Big Papi, they had Luke Scott. I trust that, after years of #LukeScottFacts, I feel that I don’t need to expound on this.

We play real baseball, they have Joe Maddon.

They’re cheap, which is why they don’t steal our players.

Due to our sense of irony, there are even instances when our fake things are more real than their reality. For example, regarding fake Twitter accounts, Red Sox fans have, well… Me! And Devil Rays fans have “RaysFanGio,” who is nominally a real person but, since everything about Florida is fake, I don’t think his lame existence actually exists.

Boston is erudite city whose populace is enlightened to science. Florida has a governor who forbids state officials from mentioning “global warming” while Miami makes plans to deal with flooding…

But I digress. All of this strays away from the question of whether we, as Red Sox fans, should hate the Devil Rays more than the Yankees. Essentially, the fact that I even ask this means it is a rhetorical question. Given the attitude of both teams and the traditions of the geographic areas that they represent, the answer is obvious.

In fact, the only fake thing missing from Tampa Bay is Dan Shaughnessy. And they can bleepin’ take him.

* – I struggled with using present or past tense here. Zobrist now plays for the A’s, so should I use “had” or have”? Ultimately, I opted for the present tense because, even though Zobrist is no longer in Tampa Bay, he represented the patheticness of this organization for so long that he might as well still be a member of this band of ingrates.