The Game Hidden Between Buchholz’s Pitches 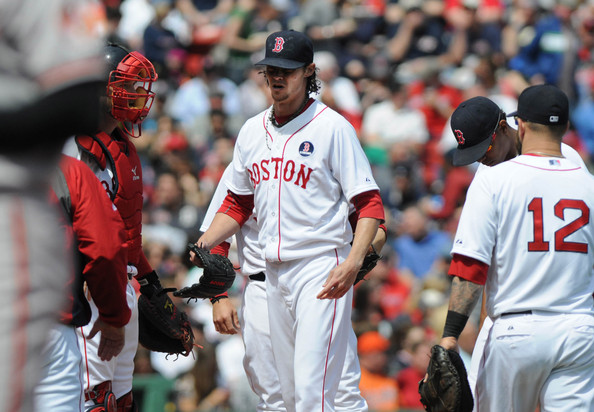 When two teams play baseball, two games are being played simultaneously: the pitching, hitting, and fielding game that fans see, and the hidden (don’t call it “cheating”) game where players try to get gain a competitive edge on the opposition.

Fans usually hear about the hidden game after the fact – like when Joe Mauer stole signs in a game against Detroit in 2009. Mauer was on second base and had a clear view of every sign the catcher dropped down. When Mauer figured out whether a fastball or breaking ball was coming, he would either touch his helmet or do nothing before the pitch to relay that information to the batter. Occasionally, play-by-play announcers will catch onto the hidden game and report it during a game. The most recent example of that is Don and Jerry ranting about the pine tar on Michael Pineda‘s hand during a recent Red Sox v. Yankees game.

But whether or not we, as fans, are lucky enough to hear about it, the hidden game is always being played inside of a baseball game.

So when Clay Buchholz gave up seven hits and six runs in the third inning of yesterday’s Red Sox game with the Orioles, was the hidden game being played? Absolutely. And I wish I could tell you the details of that game.

One complaint I’ve had about NESN over the years is their lack of focus on the game itself. Frequently during games, a player will get a hit and NESN will spend time panning the camera on the player while he’s standing on base, then switch to the next pitch being thrown while the pitcher is in mid-windup. Then there are other diversions: like a fan throwing pizza at another fan, or Heidi Watney choking on a corn dog (which became metaphor nobody needs to think too deeply about to grasp)… There’s a million little diversions to point out, and I don’t mean to be a killjoy, but they all distract from both baseball games that are being played.

In the case of Buchholz’s disastrous third inning, I watched it over again a couple of times. Only once did NESN allow me to see some signs that David Ross dropped to Buchholz to decide on which pitch to throw. At barely any time did NESN have a camera on the Orioles’ baserunners, so I couldn’t tell if they made any telltale body motions that tipped off Buchholz’s next pitch to the batter.

But, despite NESN’s distractions that don’t allow us to keep our attention on the game; and despite the implication that the other team must be cheating, an explanation for the Orioles hammering Buchholz may be more mundane: they may have picked up on where Ross set himself up to receive Buchholz’s pitches, and they were able to relay that information to the batter.

I don’t consider this cheating because, quite frankly, if Buchholz didn’t take forever and a day to make a pitch when runners are on base, baserunners probably wouldn’t have time to relay information about where Ross has set up to the batter.

Example 1: The first batter of the inning, Steve Lombardozzi, hits a single. Next batter is David Lough. Ross immediately sets up outside, then Buchholz steps off the rubber. Delay. Buchholz prepares to pitch again, but throws a pick off attempt to first base. Another delay. After the pick off attempt, Ross sets up outside again – so they never changed what pitch was next up – and Lough gets a first pitch single. It took Buchholz around a minute to get through that charade and deliver a pitch to the plate, and anyone paying attention to where Ross setup would have known what was coming. Lough certainly did.

Example 2: After Lough, Nick Markakis came to the plate. This is the only time NESN allowed the viewer to see what signs Ross dropped to Buchholz between one of the pitches, the 2-2 pitch. Ross’s sequence ended with two fingers, Buchholz appeared to throw a two seam fastball, and Markakis smacked it for a single. It’s worth noting that in this at bat, and throughout the inning, Ross sometimes tried to deliberately slow down the time it took him to set up to receive the pitch – waiting until Buchholz was in his windup. So, in this instance, the Orioles may have stolen a sign. Also worth noting that Buchholz’s pitch was a meatball down the center of the plate, so maybe the Orioles didn’t even need to steal a sign.

Example 3: Nelson Cruz bats after Nick Markakis. Ross sets up outside way before Buchholz starts to deliver his pitch, and Cruz swings like he knows an outside fastball is coming – but Buchholz misses his target by a foot, it becomes an inside fastball that Cruz fouls off. Ross again sets up early on the 0-1 pitch, and it’s the outside fastball Buchholz tried pitching the first time. Cruz smacks it for a single.

Afterwards, Buchholz induced a fielder’s choice ground ball from Adam Jones (albeit with a run scored), but Steve Clevenger gets a hit with a ball deep to right field. Jonathan Schoop, the last batter Buchholz faces, has a seven pitch at bat that ends when he hits a curveball off the Green Monster. Buchholz’s first pitch to Schoop was a curveball off the plate, so Schoop already knew what Buchholz’s curveball looked like. Unfortunately, Buchholz’s second curveball was over the plate. Schoop’s hit was probably totally legit.

As I mentioned previously: Do I know if Orioles’ baserunners were relaying information about Buchholz’s pitches to batters? Nope. Absolutely not. Due to the way NESN broadcasts these games, I don’t have a clue regarding what the Orioles’ baserunners were doing. But it’s quite feasible that, because of Buchholz’s intentional laboring between pitches, he gave the Orioles time to execute the hidden game against him.

All it took was Lombardozzi’s single at the top of the inning to give the Orioles a baserunner with a chance to relay Ross’s placement to receive Buchholz’s pitches to batters, and the Orioles certainly executed after that. Buchholz gave up seven hits – including 5 hits in a row – and six runs.

After the game, John Farrell said that nothing is physically wrong with Buchholz. Comments were made about Buchholz needing to increase his arm strength, which would explain why his fastball barely tops 90 mph. His pitches also lack movement, and 88-90 mph straight fastballs can easily become batting practice pitches. So maybe Buchholz just sucked. Or maybe he’s hiding an injury and he should go on the DL.

But, if you’re able to catch a replay of the game, watch that third inning again. Don’t you think that something hidden, that we didn’t see the first time we watched the game, could be going on?