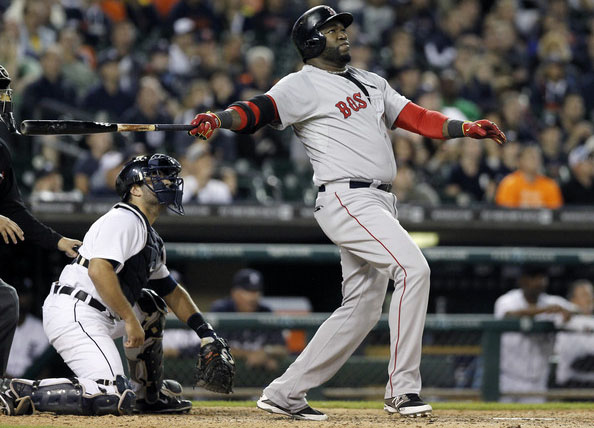 David Ortiz #34 of the Boston Red Sox hits a three-run home run that gives the Red Sox a 5-3 lead with catcher Alex Avila #13 of the Detroit Tigers looking on in the ninth inning at Comerica Park on June 8, 2014 in Detroit, Michigan.

The Boston Red Sox started the week having won seven games in a row after losing 10 straight. They entered play on Sunday night against the Detroit Tigers having been swept in Cleveland and then losing the first two at Comerica Park.

It looked like they were on their way to their second straight sweep on the road trip and second of the season by the Tigers. But one swing of the bat by David Ortiz changed everything.

Big Papi’s three-run homer in the top of the 9th off of former New York Yankee Joba Chamberlain gave the Red Sox a 5-3 lead and Koji Uehara made it stand up for the win with the save, his 12th of the season.

Brock Holt continues to rake at the plate as he went 4-for-5 from the leadoff spot with a run scored. He also started in left field for the first time in his career. With Mike Napoli back in the lineup last night, skipper John Farrell is looking for ways to keep Holt’s bat in the lineup as he settled down the leadoff spot for the Red Sox.

And oh by the way, Holt even made a great defensive play with a superb catch out there in left.

Napoli, who declared himself ready after facing Clay Buchholz in a simulated game earlier in the afternoon, returned to the lineup with three hits, including a solo home run. Dustin Pedroia walked twice and picked up an RBI on a sac fly.

John Lackey picked up the win and was almost victimized by no run support again until Papi’s blast. Lackey went eight innings, allowing three runs (two earned) on seven hits and a walk while striking out five.

And if you must check the enemy news, check out the Detroit Free Press, Detroit News and M-Live.com websites. You can also check out our Bloguin brother, Detroit4lyfe.