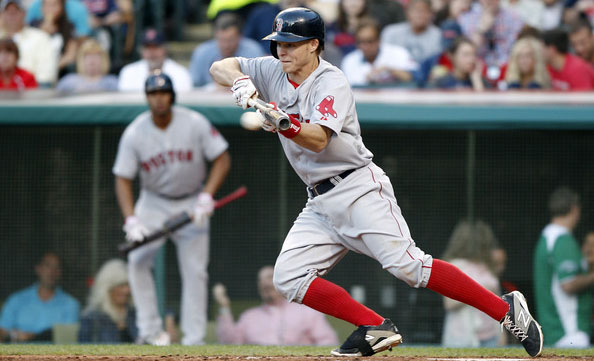 Brock Holt #26 of the Boston Red Sox attempts a bunt in the fifth inning against the Cleveland Indians on June 3, 2014 at Progressive Field in Cleveland, Ohio.

Brock Holt is not as good as you think he is – at the plate, at least. Holt has done a tremendous job in the field, making plays at first base and in left field that make our eyes jump out of their sockets. The fact that Holt has never played those two positions before and played them flawlessly while maintaining his torrid pace at the plate means he’s a hidden gem, and I’ve loved watching his emergence over the past month.

But Holt can’t keep this up. Nobody can.

Holt’s batting average on balls in play (baBIP) is currently .413. Every time Holt lays wood on the ball, it’s getting that lucky hop to go by a fielder. But the implication of luck here is important to note because when hitters sport a baBIP over .400 it some point during the season, it will not last. A hitter can gear their training to hit for more power or better contact to all fields, but it’s difficult to train for baBIP – it’s a luck-based statistic.

Since 1945, the only players who have sustained a .400+ baBIP are Rod Carew, Manny Ramirez, Roberto Clemente, and Jose Hernandez. Hernandez is the only oddity on that list. Other than Hernandez, we’re talking about players with Cooperstown numbers who managed to eek out a .400+ baBIP for an entire season once (or twice, in Carew’s case) in their careers.

So to expect Brock Holt to continue his current pace of ripping pitchers to shreds, we would have to expect him to be better than: Ted Williams, Pete Rose, Rod Carew, Roberto Clemente, and Manny Ramirez. Holt would have to be that Jose Hernandez oddity.

Could that happen? Sure, but I wouldn’t bet on it. Many Hall of Fame hitters have tried and failed to have a baBIP over .400 for an entire season once in their careers. You would have to have an enormous amount of faith in Brock Holt to believe he can continue hitting like this.

Like I stated previously: I love watching Holt play. But at some point, reality will interlude and Holt’s hitting will drop off. When that happens and the Red Sox are forced to rely more on Stephen Drew, I hope every Boston sports journalist who said the Drew signing sucks will realize how important it is to have depth on the roster. Afterwards, I hope they all volunteer to retire and never be heard from again.