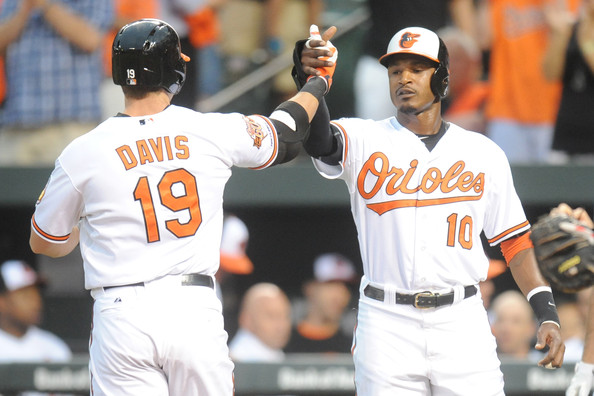 Chris Davis #19 celebrates a two-run home run in the first inning with Adam Jones #10 of the Baltimore Orioles during a baseball game against the Boston Red Sox on June 11, 2014 at Oriole Park at Camden Yards in Baltimore, Maryland.

I’m pretty sure we can all agree on one thing right now. The Boston Red Sox are not a fun team to watch this season.

After being shutout last night by the Baltimore Orioles 6-0, they finished their nine-game, ten day road trip with a 2-7 record. Things were so bad in the home of The Wire where they managed one measly run. Of course that one run got them a victory but one run people, one freaking run.

The Orioles did most of their damage in the 1st innings off of Rubby De La Rosa when they scored three runs. One on an Adam Jones double. Jones came into score on a Chris Davis blast. After that De La Rosa seemed to settle down a little bit.

And according to ESPN analyst Rick Sutcliffe, part of the reason why De La Rosa may be struggling lately is that it’s entirely possible he is tipping his pitches. Of course he talked about this during the game and if anyone in the Orioles clubhouse was watching, they could relayed a message to the hitters.

Either way, it’s something for the Red Sox to look at and correct with their young flamethrower if true.

Dustin Pedroia led the Red Sox with two hits. David Ortiz and A.J. Pierzynski had the others.

The Red Sox head back to home to face the Cleveland Indians for four games. The Indians swept the Red Sox at the beginning of the 2-7 road trip.