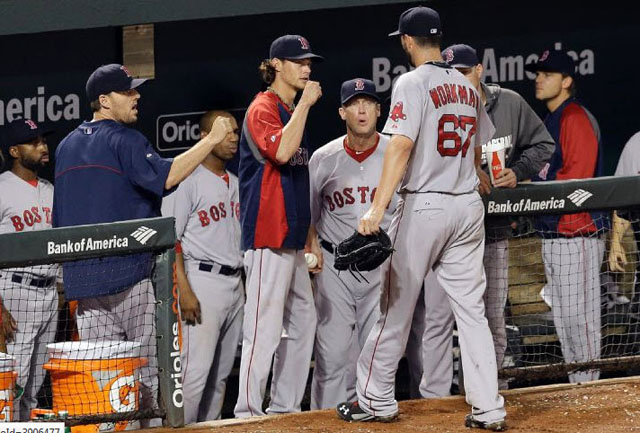 Teammates greet Boston Red Sox starting pitcher Brandon Workman (67) as he walks off the field at the end of the sixth inning of a baseball game against the Baltimore Orioles, Tuesday, June 10, 2014, in Baltimore.

The Boston Red Sox are reeling right, there’s no doubt about that. They’ve had issues with the backend of their rotation between Clay Buchholz and Felix Doubront. Brandon Workman and Rubby De La Rosa have been filling in for them while they heal up from their respective injuries.

De La Rosa’s sample size is too small right now but Workman’s hasn’t been. In each of his three previous starts, he’s given the Red Sox some solid work. Last night was no different.

Workman allowed no hits over 5 ⅔ innings before allowing a single to Ryan Flaherty. He would end up going 6 ⅔ innings and the bullpen would do the job the rest of the way as the Red Sox beat the Baltimore Orioles 1-0 at Oriole Park at Camden Yards on Tuesday night.

The interesting part about Workman’s longest outing of his 27 game big league career is the fact that he had to wait out two rain delays in the 2nd inning. The first one was 15 minutes long while the second one lasted one hour and 18 minutes.

Andrew Miller, Junichi Tazawa and Koji Uehara combined to finish off the O’s with Uehara picking up his 13th save of the season.

Mike Napoli provided the only run of the night when he singled in Brock Holt from second base in the 3rd inning. Holt continues to provide a spark at the top of the lineup as he went 2-for-5 with a run scored. A.J. Pierzynski also had two hits.