Cespedes and the Value of Protection 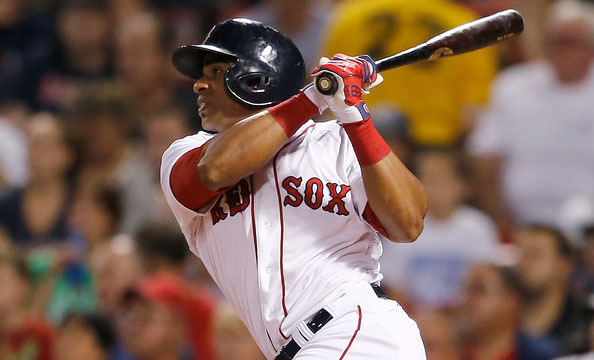 Yoenis Cespedes #52 of the Boston Red Sox doubles in a run in the third inning against the Toronto Blue Jays at Fenway Park on September 6, 2014 in Boston, Massachusetts.

When the Oakland A’s traded Yoenis Cespedes to Boston, something weird happened to Brandon Moss.

Moss has never been a great hitter. His batting average is low, his strikeouts are high – but he has power. He hit 30 home runs in 2013 and looked to be on his way to putting up similar stats this season. Moss, along with Cespedes and Josh Donaldson, comprised the core of Oakland’s hitting attack.

Swapping one of those power hitters for Jon Lester, an ace starter, seemed like an even deal. Oakland would score less runs, but pitching matters more than hitting in the playoffs. This trade shouldn’t have backfired.

But after Cespedes left, Brandon Moss became a shell of the hitter he was in 2013. In fact, Moss’ stats without Cespedes being on Oakland’s roster look similar to his stats when he hit behind Cespedes in the batting order instead of hitting in front of Cespedes.

This is interesting, because if Moss performed worse when Cespedes wasn’t protecting him in the batting order, this suggests that Cespedes provides value in the protection he provides to hitters in front of him. Sluggers protecting hitters is one of those facets of baseball that aren’t reflected in measures like WAR.

I will not call WAR a “stat” because it’s a weighted measurement of players, and as far as I’m concerned, the linear weights attached to calculations that comprise WAR are biased. Therefore, WAR is an opinion and not a stat. And the opinionated bias of WAR is reflected in things that those calculating WAR choose to ignore, like the protection power hitters provide to other hitters in the lineup.

To see what effect sluggers protecting hitters has, let’s look at what happens to Moss when Cespedes isn’t hitting behind him.

Cespedes mostly hit 4th when he was with Oakland; sometimes he hit 5th. Moss generally hit in front of Cespedes, but Oakland’s manager likes to switch the batting order around a lot so there’s a decent sample size of times when Moss hit behind Cespedes. During those times, when Moss bats 5th or 6th in Oakland’s batting order, he’s hitting .188 with a .317 OBP, and he has 5 HR. That’s one homer every 18 AB, which isn’t that bad, but you have to hit the ball to get on base and drive in runs. As a .188 average attests to, Moss was not hitting the ball when he batted behind Cespedes.

That stat line looks similar to Moss’ stats post-Cespedes. Here’s how Moss has done in August and September: .163 AVG / .317 OBP. His power has dropped off as well, with Moss hitting only 2 HR in that time.

Coincidentally, while Moss has regressed, David Ortiz‘s stats have received a boost since Cespedes arrived in Boston. Before the trade, Ortiz was hitting .250 with a .344 OBP, and he averaged a home run every 15.36 AB. Which isn’t bad, but look at Ortiz’s stats with Cespedes hitting behind him: .307 AVG / .393 OBP, and he’s averaging one HR every 14.11 AB.

What does this mean?

Brandon Moss regressing without Cespedes and Ortiz improving with Cespedes could just be a coincidence, true. But I’m reminded of something my favorite International Politics professor, one of those genius intellect type of people, told me when I was an undergrad: “I don’t believe in coincidences.” In baseball, just like in anything else, if something remarkable happens, there’s probably a clear and concise explanation for this event.

Something remarkable is happening to hitters when Cespedes is behind them in the batting order. Personally, I think slugger protection of hitters is the main factor here – but I could be wrong. Something I haven’t seen may be in play here; or it could be a combination of factors.

One thing all reasonable baseball fans should agree with, though, is Cespedes and slugger protection makes for an interesting discussion. I’d hate to see a discussion of Cespedes’ value devolve into an argument over what his WAR is, as so many discussions about players devolve to these days. This is interesting and worthy of further discussion. Let’s talk about it.