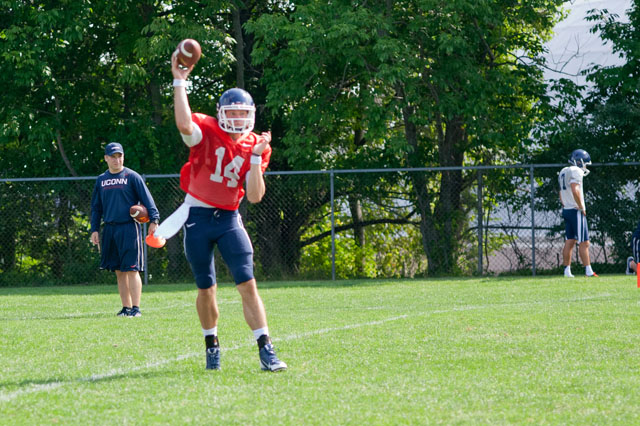 UConn Huskies head coach Bob Diaco had an interesting dilemma on his hands. He had three starting quarterbacks coming back for his team in Tim Boyle, Casey Cochran and Chandler Whitmer.

As a true freshman in 2013, Boyle saw action in five games, starting four before being replaced by Cochran for the final four games of the season.

While I can’t say what Diaco was thinking, the general thought was that Boyle would sit out this year gaining an extra year of eligibility. Normally most freshman don’t play, earning a redshirt year. Basically what this all means is that all college athletes have five years to play four.

With Boyle, he still has four years to play three. So to me, it wasn’t a surprise when Diaco announced that Boyle was “going to be protected” this year.

What Diaco means is that if Boyle doesn’t have to play, he won’t. But if he does, he’ll be ready to come in.

Watch below as Diaco explains the situation with Boyle and also Boyle’s reaction to the news.