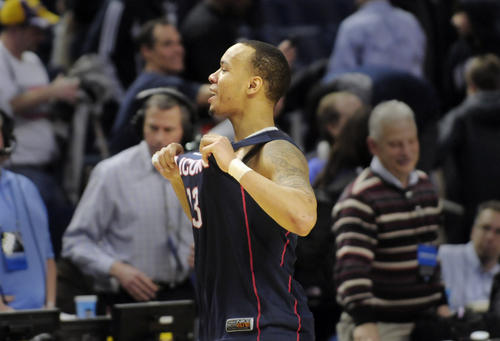 Things weren’t looking too bright for the UConn Huskies men’s basketball team in the first half on Saturday night in the Third Round of the 2014 NCAA Men’s Basketball Tournament.

They were trailing by 10 points and their leader, Shabazz Napier, was sitting on the bench with two fouls.

But instead of falling behind even further, the No. 7 seeded Huskies started their comeback against the No. 2 seed, the Villanova Wildcats. And in the second half, it was Napier who provided the spark.

Napier’s big second half of 21 points helped UConn to a 77-65 win over their former Big East rivals Villanova to advance to the Sweet 16.

The Huskies improve to 28-8 on the season while the Wildcats finish up at 29-5.

Napier finished the game with 25 points to lead all scorers. Lasan Kromah came off the bench to add 12 points for UConn while DeAndre Daniels, Ryan Boatright and Terrence Samuel all had 11 points.

Villanova got out of the gates quickly as they opened up on a 9-2 run. They would build their lead to 10 points at 19-9 when Napier headed to the bench.

Then the Wildcats went cold and the Huskies mounted their comeback behind Samuels, Daniels and Kromah. It was Kromah’s three pointer that gave them their first lead at 23-20. A Giffey layup would make it 25-20 but Villanova scored the final four points of the half to trail by one.

In the second half, the teams exchanged the lead until a Daniels layup with put the Huskies up for good at 37-36. They would continue to build their lead as Napier began to take over.

He would hit two three pointers in a row to extend UConn’s lead to 11 at 51-40. Villanova would get no closer than five points the rest of the way.

UConn will be back in action on Friday night at Madison Square Garden when they’ll take on the winner of Sunday’s game between the Iowa State Cyclones and North Carolina Tar Heels.

Here are the postgame quotes from UConn Huskies head coach Kevin Ollie and his players.

Here are the postgame quotes from Villanova Wildcats head coach Jay Wright and his players.