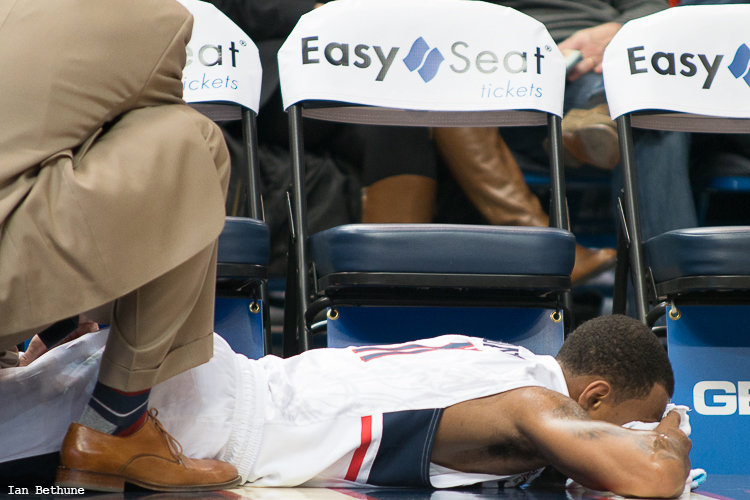 UConn G Ryan Boatright (11) has his thigh worked on after being kneed there late in the first half against Temple at the XL Center in Hartford, CT.

The UConn Huskies men’s basketball team faced a big test on New Year’s Eve afternoon in conference opponent the Temple Owls. And they faced an even bigger one when their leader Ryan Boatright went down with a deep left thigh bruise.

While UConn fought hard and gave it their all to the bitter end, they eventually fell 57-53 to Temple in front of 13,428 and a nationally televised audience on ESPN2 at the XL Center in Hartford, CT.

Boatright was injured late in the first half when he was kneed in the thigh. He sat out the last minute of the first half and tried to go in the second half but was unable to do so. He finished with just two points in 17 minutes.

Amida Brimah led UConn with 12 points along with six rebounds and three blocks. Daniel Hamilton notched a double-double with 10 points and 12 rebounds with five assists but missed two crucial free throws (he was called for a lane violation on third one) in overtime. He also had six turnovers.

Kentan Facey fell one point short of a double-double with nine points and 11 rebounds. Both Rodney Purvis and Omar Calhoun each had seven points.

Temple’s Jesse Morgan led all scorers in the game with 17 points and had a team-high tying six rebounds with Jaylen Bond (seven points). Quenton DeCosey added 11 points while Will Cummings had eight points and seven assists.

Next up for the Huskies is a trip to Gainesville, FL with the struggling Florida Gators on Saturday afternoon. Tip is scheduled for 2 p.m.