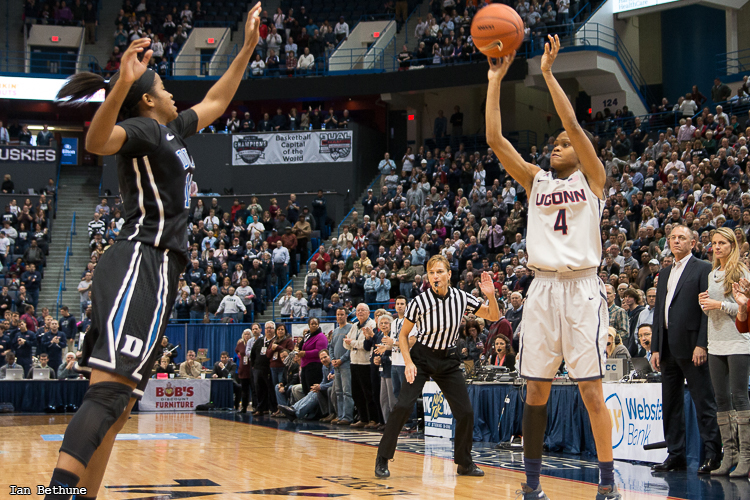 UConn G Moriah Jefferson (4) puts up a three-pointer over Duke G Ka’lia Johnson (14) to start the second half at the XL Center in Hartford, CT. Jefferson would make the three as part of her 18 points.

This was the last time the Duke Blue Devils and UConn Huskies women’s basketball teams will meet on the court in the regular season. After last night’s “pathetic display” according to Duke head coach Joanne P. McCallie, I’m sure she’s happy not to see them again until NCAA Tournament time (possibly).

Using an 11-2 run in the first half and two three-pointers by Moriah Jefferson to start the second half, UConn continued to build its lead on their way to an 83-52 win over Duke in front of 13,514 and a national television audience on ESPN2 at the XL Center in Hartford, CT on Monday night.

All five Huskies starters were in double figures.

For the second straight game, Jefferson led the team in scoring with 18 points and had four assists and five steals. Breanna Stewart and Kaleena Mosqueda-Lewis each had 14 points and five and six rebounds respectively. Stewart did however commit six turnovers.

Sierra Calhoun, brother of UConn men’s player Omar Calhoun, had a rough game as she was 0-of-8 from the floor (0-of-4 from three) and three turnovers.

As it always seem to be in bigger games, it was a battle of runs.

Duke got out to the early lead only to see UConn seize control when head coach Geno Auriemma went to the press and a zone. However Duke made some adjustments before UConn’s 11-2 run at the end of the first half.

The Huskies are back in action on New Year’s Eve afternoon when they’ll take on a new opponent in the American Athletic Conference, the East Carolina Pirates, in Greenville, NC at 2:30 p.m.