Yesterday we looked at the NL East, Sunday was the NL West, Monday was the AL West, Tuesday we previewed the NL Central, Wednesday we took a trip around the AL Central and today it’s the AL East.

Last year the AL East produced the World Series winner, a wild card team and should have produced the manager of the year.  It has over the last 30 years been the best division in baseball and once again should provide a lot of summer entertainment as the teams’ beat each other’s brains out.  The only exception being a year or two ago when all five seemed fairly even.  There is some separation now.  The Jays have clearly fallen back, while the Orioles have made a couple late moves to try to improve and their best bet is battling New York for third.  The Yankees spent a lot of money in a clear effort to reclaim what they feel is theirs and time will tell if they spent it wisely in an effort to catch up to the Rays and the Red Sox.  Hold on it’s going to be a great summer. I don’t know where to begin other than to say John Farrell and his coaches and Ben Cherington and the baseball ops staff delivered one of the most improbable seasons ever in any sport in 2013.  Between September 2011 and September 2012 this franchise was a disaster and Cherington righted the ship with the correct field manager and quality people in the clubhouse and rewarded the fanbase with a World Series title. Now they look to be the first team to repeat since the Yankees of 1998-2000.  In that time period only the Yankees and Phillies made it back with chances to defend their title and the Rangers were the only other squad with back-to-back Series appearances.  It’s a difficult task but hold on and buckle up. Last year the Rays dealt pitching for hitting and came away with a standout outfielder and 2013 AL Rookie of the Year in Wil Myers.  This year the big rumor has been about them moving former Cy Young Award winner David Price.  Price has two years left before free agency and this is about the time in the past that the Rays have chosen to move pitchers.  So far Price remains, but for how long is the question? Are teams being asked for too much in return and that’s why? Or have the Rays just not found a deal to their liking? Or are they going to do with Price what they did with Carl Crawford and B.J. Upton and just take them to the end?

They did make some nice additions though in adding C Ryan Hanigan who should help immensely, and brought back RP Grant Balfour and traded for RP Heath Bell which gives them two proven closers in the pen.  Whatever they do, they need to once again compete in the AL East with the World Champion Boston Red Sox, the New York Yankees and the Baltimore Orioles so stay tuned.

*Andy Hellickson had elbow surgery in January not expected to pitch until end of May/early June. They failed to make the post season last year for only the second time in the Derek Jeter era and there’s a lot of pressure on both Joe Girardi and Brian Cashman to get back. They dipped big into the free agent market signing Brian McCann, Jacoby Ellsbury and Carlos Beltran and in mid January they reeled in Japanese free agent Masahiro Tanaka and inked him to a 7 year/$155 million contract.

Even after spending $491 M on those players above they still will have Kelly Johnson at third and Brian Roberts at second, both signed as free agents but neither are impact guys. In fact Roberts hasn’t played more than 77 games since 2009 when he was in 159 games for Baltimore.  Their starting lineup doesn’t have one guy under age 30 and there’s only two guy on the bench in their 20’s, C Francisco Cervelli is 28 and IF Eduardo Nunez is 26.

Jeter has announced this is his last season and you wonder if he can stay healthy for the first time since 2011, Alex Rodriguez is gone for the season with a PED suspension and there are still questions about the pitching.  A third place battle with Baltimore is about as good as I see them doing unless some of these guys have monumental years. 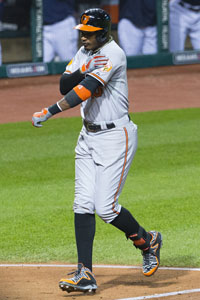 In 2012 the Orioles were dominant in one run games. In 2013 that trend reversed itself and it helped sink them.  So what do they do? They trade one of the most effective closers in the last two years Jim Johnson for an infielder who played 8 games last year but is under control until 2016.  I bet Buck Showalter’s head exploded.  But I don’t think you can lay blame on GM Dan Duquette for that move as it has owner Peter Angelos and his tight purse strings all over it. He didn’t want to pay Johnson who had 101 saves between 2012-13 and is a Super 2 in arbitration and is looking at getting $10 million for 2014. He may possibly have kept them out of the hunt with this move.

The O’s lineup should keep them in games, especially with the late addition of Nelson Cruz on a one-year deal.  The pitching is what should worry people as the bullpen seems decent but the question I really have is the rotation. In Mid-February they added SP Ubaldo Jimenez with a 4 year/$48 M deal so that will help.  Even though he becomes the top of the rotation guy but he still isn’t a true #1 and there are still a bunch of 3’s and 4’s in the O’s starting five. 2013 was a huge bust for the Blue Jays, the blockbuster deal with Miami went nowhere for the most part all though they did get one of MLB’s most electric leadoff men in SS Jose Reyes.  This year they are back to where they have been for most of the past 20 years near or at the bottom of the division.  Let’s see what they can do after staying away from any big trades or free agent movement. Injuries right out of the gate killed their start last year and Gibbons was given a pass but he has to be feeling some heat to finish better than 74-88.

Tomorrow, in our final day, we will look at the big winners in 2013.