The Highest Paid MLB Players at Each Position 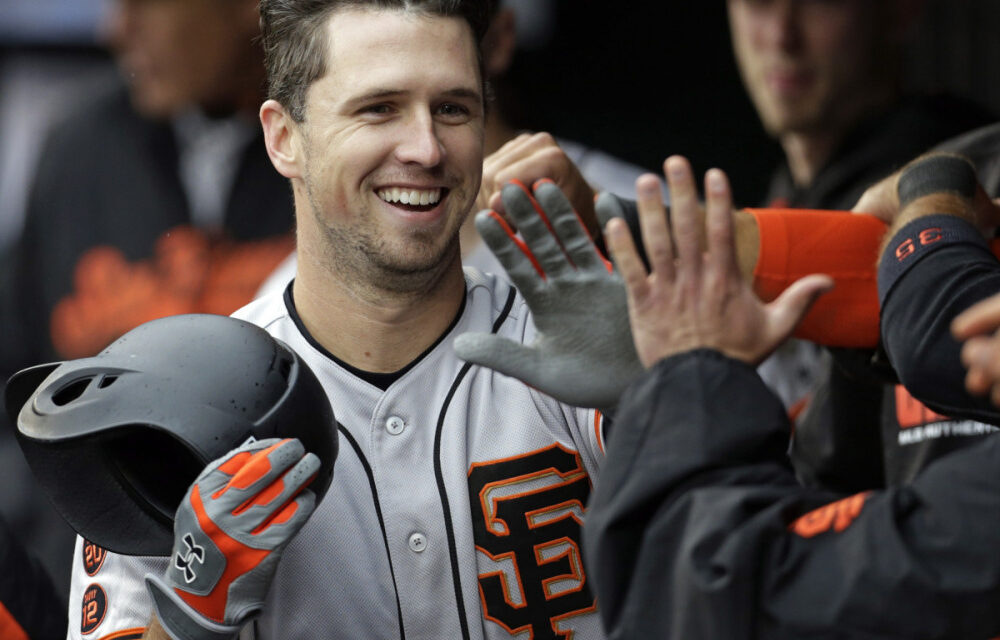 Even though the winter seemed to creep by at a slow pace, we saw some gaudy contract numbers eventually get tossed around. Manny Machado and Bryce Harper both became $300 million players, and Nolan Arenado set a record for average annual value. Let’s also not forget that Patrick Corbin turned a career year into a $140 million payday with the Washington Nationals.

Coincidentally enough, only one of them ends up on the 2019 All-Money Team. According to Spotrac’s payroll salary rankings, the following 11 ballplayers all have the honor of bringing home the most bacon at their respective positions by the time October rolls around. If you’re looking to put your money where your mouth is, then you can use your SugarHouse Sportsbook bonus code to place a wager on any of these big-money players’ teams during the 2019 Major League Baseball season.

Sitting at the top of his position from an annual salary standpoint is a familiar feeling for the Giants’ backstop. He, Yadier Molina, and Russell Martin are the only three catchers in baseball making at least $20 million in 2019, with Yasmani Grandal checking in at fourth with his $16 million salary.

This past year was a weird one for Posey. A hip injury limited him to 105 games, 448 plate appearances, and 2.0 fWAR. It was the first time all three of those numbers were that low since 2011. Between these two occurrences, Posey never played in fewer than 140 games and was worth at least 4.0 fWAR on five occasions.

His power bottomed out in 2018 (five homers and a .098 ISO), which could be blamed on the hip injury. This is something that’s been going on for quite some time, though. Since slugging 22 homers with a .179 ISO in 2014, those numbers have gone down each following year.

One would probably imagine that he’d be struggling at the plate in San Francisco compared to being on the road, but not so much last year. In 212 home plate appearances, Posey posted a 149 wRC+ with a .136 ISO, compared to a 68 wRC+ and .065 ISO in 236 road plate appearances.

This upcoming season is the second of six consecutive years in which Miguel Cabrera will earn at least $30 million. Despite a decrease in production compared to earlier in his career, he’s not sorry about it, either.

We’ve already talked about Miggy quite a bit this winter, and we’ve also done so recently. One of the many things to watch with the veteran first baseman will be his performance against curveballs. He struggled against that offering in 2017 to the tune of a .265 OPS, .034 ISO, 29.0% strikeout rate, and -22 wRC+. Despite the small sample size in 2018, those numbers all improved drastically to .747, .143, 18.2%, and 115, respectively.

Robinson Cano also takes his customary spot at the top, but is doing it in a new uniform this year. The gap between him and second place is interesting to note, as well. Dustin Pedroia is the league’s second-highest earner at the keystone, making $15.125 million this year with the Boston Red Sox.

It’s easy to see the concerns here — Cano is entering his age-36 campaign and is still fresh off last year’s PED suspension. The 80 games he played in was the lowest single-season total of his career. He had never played in fewer than 122 games during a single year, which happened all the way back in 2006. On the flip side, though, Cano’s body might be as fresh as it’s ever been since debuting with the New York Yankees in 2005.

As a ground-ball-heavy hitter, Cano’s rate of contact within the strike zone and his quality of contact will both be important stats to watch. His 92.3% contact rate on strikes was among the top-30 in baseball for players with at least 300 plate appearances last year, while his 41.5% hard-hit rate was a single-season career high.

Technically, Troy Tulowitzki could be at the top of the shortstop money list. However, it’s time for some different faces, plus him getting released by the Toronto Blue Jays and picked up by the Yankees for the league minimum made this switch possible.

The Rangers shortstop appeared in 97 games during the 2018 season, which was easily a career-low mark. It was the first time he appeared in fewer than 145 games as a big-leaguer (he debuted in 2009). The most notable part of Andrus’ 2017 season was his homer binge. He launched 20 dingers, which was the first time he reached double digits in a single year. It was also more than his combined homers hit from 2014-16.

Despite the general lack of opportunity, Andrus only slugged six dingers last year, which was more in line with his career norms. With a fly-ball rate that typically hovers around 30-31%, it’s imperative for him to take advantage of the balls he does get in the air. In 2017, the 30-year-old posted a 146 wRC+, .500 ISO, and 36.1% hard-hit rate on fly balls. Those numbers all decreased significantly this past year to 11, .235, and 26.2%, respectively.

Even if Arenado didn’t get the huge eight-year contract he just signed with the Rockies, his 2019 salary would’ve landed him at the top of the hot corner money rankings. It’s about time, too — the third baseman has been a steal from a value perspective for Colorado for quite some time.

He’s led the National League in homers three times, RBI twice, and hasn’t let any other NL third baseman win a Gold Glove award since debuting in 2013. Seems as if this guy is the whole package, and the Rockies don’t have to worry about the Yankees or anyone else trying to steal him from them next winter.

It’s probably shocking to hear this, but the Mets’ long-term commitment to Yoenis Cespedes hasn’t worked out so far. Through the first two seasons of his four-year, $110 million contract, Cespedes has suited up for just 119 games, leading to 478 plate appearances. And as he recovers from surgery on both heels, it’s unknown how much time he’ll miss this season.

He also struggled within the strike zone, evidenced by an elevated swinging-strike rate (13.5%) and strikeout rate (31.8%). It’s worth noting that those struggles happened mostly in April, where he owned a 38.1% strikeout rate. Despite accruing just 39 plate appearances in May before having his season end prematurely, his strikeout rate was back down to 17.9%, which is much more like Cespedes’ career norms.

Mike Trout is the highest-paid position player in baseball, but it is the very definition of a bargain. I mean, what else can you say about a 27-year-old that could already get elected to the Hall of Fame if his career ended today?

Since debuting in 2012, Trout has posted an fWAR of at least 9.0 on five different occasions. When using FanGraphs’ Dollars metric, his performance have been worth at least $65 million on six different occasions. The one time it didn’t happen was in 2017, when his 6.9 fWAR was worth “just” $54.9 million due to hitting the injured list for the first time in his career.

Trout’s plate discipline continues to improve as well. After posting an 11.8% walk rate in 2014, that number has increased in each of the following four years, culminating with a career-high 20.1% clip in ’18. He’s also found a way to increase his wRC+ and OPS in each of the last three years. The dude is just not human.

Jayson Heyward brings value to the Cubs, but there’s no doubt the front office wished they could’ve taken this money and awarded it to Bryce Harper on an annual basis for the foreseeable future. He’s won two Gold Gloves during his first three years in Chicago, but the offensive side of his game hasn’t gone well.

The 29-year-old posted a career-high 5.6 fWAR with the St. Louis Cardinals in 2015. In three seasons with the Cubs, his combined fWAR is 4.0. He’s never been one to light up the quality-of-contact leaderboards on a consistent basis, but his soft-contact rate has been incredibly high since arriving at Wrigley. That number hasn’t been lower than 25.0% during his current contract.

Fastballs haven’t typically been a problem for Heyward — it’s secondary pitches. The curveball was especially tough on him in 2018. He produced a -15 wRC+ against that offering last year, along with a .286 OPS, and 25.0% infield-fly rate.

The Machine’s declining performance on fly balls isn’t helpful, though. Since posting a 185 wRC+ for this batted-ball event in 2015, that number has gone down each year that’s followed, bottoming out at 88 in ’18. Of the four months he suited up for last year, Pujols produced an overall wRC+ above 87 just once, when it settled in at 153 during the month of July.

Everyone knew this contract would be a mess toward the end, and that’s exactly what’s happening. He’s under contract through 2021, with his salaries increasing to $29 million in ’20 and $30 million ’21 before reaching free agency again.

What’s changed rather drastically over the years is a decreasing reliance on his fastball. After tossing it at a 63.4% clip in 2015, that number has dropped to 51.9% each of the last two years. Strasburg’s changeup (19.9%) and curveball (19.6%) have seen an uptick in usage as a result.

They’ve both been elite weapons for him. Over the last three years, each offering has generated a strikeout rate of at least 40.0% and an opponent wRC+ no higher than 70. Opposing hitters have also failed to post an ISO above .100 on either pitch for the last two years.

This year is important to Jansen for all the obvious reasons, but also with regard to his contract. The five-year deal he signed to stay in Los Angeles includes player opt-outs in each of the final two seasons. If the 31-year-old has hopes of re-entering the free-agent market (who would if they don’t have to right now?), then that dominance he’s previously shown needs to return.