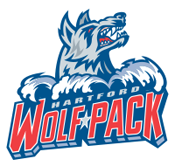 Missiaen, a third-year pro, has appeared in 14 games this year for the Wolf Pack and has compiled a record of 2-11-1, with a 3.83 goals-against average and an 88.8% save percentage.  He was signed as a free agent by the Rangers March 24, 2011, from the Baie-Comeau Drakkar of the Quebec Major Junior Hockey League.

The Wolf Pack’s next action is this Friday night, January 17, as they travel to Glens Falls, NY to meet the Adirondack Phantoms.  Faceoff is 7:00 PM, and all the action can be heard live on Fox Sports Radio 1410, and on-line at www.foxsportsradio1410.com and iHeartRadio.  Video streaming is available at www.ahllive.com.

The Wolf Pack’s next home game is Friday, January 24, a 7:00 PM contest against the Springfield Falcons.  All Wolf Pack Friday-night home games feature $1 hot dogs and $2 beers through the start of the second period, presented by Marc’s Appliance Warehouse, located at 75 Prospect Ave., Hartford, CT.

Bring Back the Whale